I bought a parrot dress

And this raised the question. Am I trying too hard to look youthful, or have I crossed into the old-and-bold-won’t-be-told phase of clothes shopping? Mostly I fear looking like I got trapped in the Tommy Bahama outlet store with Prue Leith as my stylist.

It is of course a dress featuring parrots rather than a dress made by parrots. I’d imagine parrots to be a bit shite as dressmakers due to their poor sewing skills. Hard with those claws to thread the needle. Never mind trying to shove a camel through the eye of a needle just to prove a spurious religious point, try watching a parrot trying to get a thimble on.

But yeah, it’s a parrot themed print as you can see from the photo. I ordered it yesterday from Trashy Diva where it was described as a ‘1940s style novelty tropical print’ which should have been warning enough. Not because I don’t like parrots. I’m particularly fond of the African grey, especially the swearing ones that were recently in the news. In fact, that would have been a great dress — grey parrots and the words ‘Fat Twat’ in a nice swirly font that makes you look twice to see if you read it right.

But I’m having a bit of buyer’s remorse over this dress. I’ve always had a great fear of reaching an age where I lose my sense of taste. [Tries to expunge thoughts of covid-19 infection-related taste loss] I mean my innate sense of…oh god I hate to say style because that sounds poncy and hard to back up with solid evidence. A rotating series of black t-shirts from Primark and the same jeans with fake zipper pockets that I’ve been wearing for the last 10 years doesn’t really count as a capsule wardrobe.

Post-menopause there’s been a lot to worry about. Fortunately, the urge to climb Kilimanjaro has dissipated in favor of a nice walk around the lake. But we’re now looking at painting the bathroom and upgrading our courtyard which means that an MFA and starting some sort of home-based business can’t be far behind. Supposedly post-menopause women become less visible and less fanciable/fuckable to the general population and so perhaps this explains the draw towards the bold novelty print. Can’t see me? Well, can you see me and my parrots now? It manages to attract and repel at the same time.

When you’re younger you can get away with this kind of thing. Which is of course why Trashy Diva has pictured a lovely young lass in my parrot dress. The kind of lass that couldn’t give a toss about wearing high heels and open toes on uneven ground. The one who hasn’t quite worked out that hats can generally stay on by themselves. The one with wrists so skinny that she can apparently wear CD’s as bracelets, which may be a subtle warning to purchasers — if a camel is more likely to pass through a needle held by a parrot in a thimble than your wrist is to get through a CD, then maybe reconsider, love?

Truth is that like any piece of clothing labeled as high-waisted, the rules are just different if you’re 25 rather than 55. And can the high-waist/mom jeans please go away? Also, when the hell is someone going to release a Queen’s Gambit inspired clothing range?

So now I wait for the parrot dress to arrive. Will I return it?

Or will it stay hung up until we go to Florida next year and someone 20 years older than me compliments me on my colorful costume? Yes, I’ll tell them, I’m auditioning for Parrots of Penzance and they won’t get the joke and will scour the local paper for news of the production opening.

Audrey Hepburn was 63 when she died but I don’t think she started wearing tropical or jungle-themed prints when she hit her mid-50s. Why can’t I be happy in capri pants and a boatneck top that shows off my collarbones? 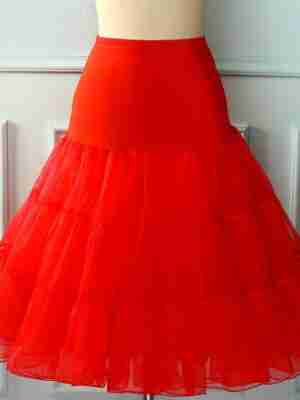 Fortunately, I have just offset the parrot dilemma by also purchasing this scarlet red crinoline petticoat. I may never ever wear it but seeing it stick out of my wardrobe makes me stupidly happy. It somehow feels more representative of how I want to be seen. Flouncy to look at but stiff to touch? No, I’m thinking more smoldering hot under the surface and just waiting to be discovered.